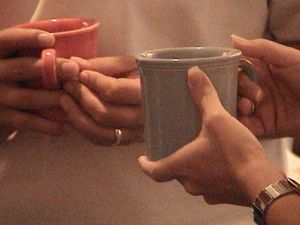 Everyone’s a buzz with Internet networking on sites such as LinkedIn, Plaxo and Facebook. But let’s not forget the power of in-person networking. It’s much easier to form a bond with someone when you meet face to face. Online networking is somewhat anonymous, since we can hide behind our computer screens. See and be seen, take pictures, and record videos (so you have good fodder for your blog!).

First, find relevant events within your industry or geographic locations. Chambers of Commerce mixers, seminars and other local business networking events are found in nearly every community. Get over the initial inertia and just go introduce yourself to someone. Move past the small talk and ask open-ended questions with substance. People actually like being asked about their business, and what they do for a living, so ask questions such as:

What’s the biggest mistake you can make?
Don’t think of networking as a sales opportunity. Everyone at the event knows why you’re there, so think of it as a mission to learn something. Your sales and referrals will come later. And don’t be the one who holds up the wall and doesn’t talk to anyone. But the biggest mistake you can make is not following up with people you’ve met. Forget this, and you’ve wasted time, energy and money.

In person networking is a fun, change of pace from the frenzied world we live online (and real food tastes a whole lot better than virtual food!). Go in with a plan, have genuine conversations with the people you meet, and let networking flourish from there.

Brian Farrell is a coach, helping clients achieve their personal and professional goals. He's also the creator of the "QA2 Method". For more about Brian, visit bfarrell.com

» Organizations who have short-term needs for sales leadership due to resignations, market forces or leaves of absence